Pastor Aaron was raised in Sacramento, California for much of his life. His formative years involved homeschool, working in the family business(mowing lawns), skateboarding, and going to church. Church was a big part of his social life. He did not have much social interaction outside of church until graduating high school when he started working in the restaurant business. So, for him church was where his friends were. For Aaron church wasn’t a place he received spiritual enrichment, church was only social for him. 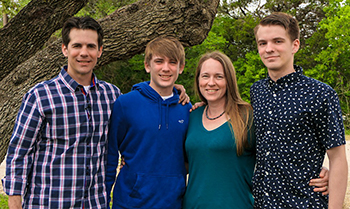 After high school Aaron was soon disenfranchised by church and the relationships he had formed there. His friends moved on with life, went to college, moved away and just living their lives. And because Aaron did not make a decision to follow Jesus, he was empty, hopeless, aimlessly moving through life.

The light was turned on for Aaron when he was invited to Calvary Chapel Boise’s college group. The pastor was teaching through the book of John and it was simple, strait to the point teaching. The word of God being taught like that was something Aaron had never experienced before. It was fulfilling and enriching.

Almost immediately  through Calvary Chapel Boise's teaching of Gods word Aaron felt Gods call on his life. He didn’t fully know what that entailed but made a commitment to the Lord that if God opened a door to minister or serve, he would walk through that door. The Lord has opened many doors since making that decision and the Lord has enabled and strengthened Aaron to do great things for the Lord.

Aaron has been able to minister in Italy at Calvary Chapel Roma for a year, a youth pastor in Southern California for five years, School Of Ministry in 2008 at CC Costa Mesa and now is in Central Texas as the Lord has led him to start CC Leander.

The Lord has put it on Pastor Aaron's heart to teach the bible verse by verse chapter by chapter through the bible and CC Leander as a body of believers is excited to see what God is doing and what God will do!